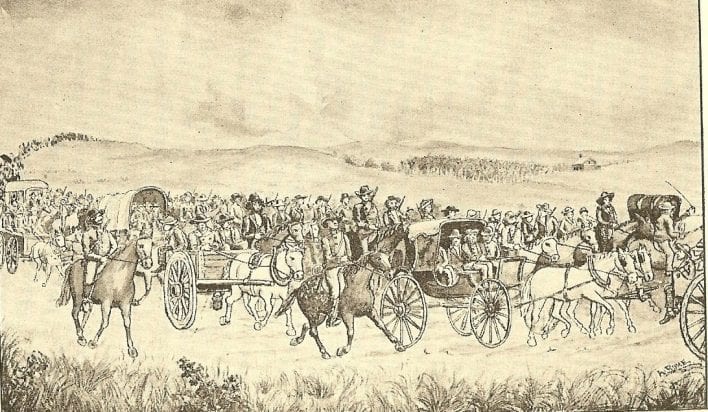 In October 1857, Free State Kansas voters decided to participate and not boycott the election for members of the Kansas territorial legislature as they had in previous elections.

As a result, they elected the first free state majority legislature in Kansas.  Frederick Stanton, acting governor, called this legislature into a special early, extra session in Lecompton on December 7, 1857.  This extra session convened for nine days and passed a total of six acts.   One act the assembly considered was how to respond to the pro-slavery efforts to force the proslavery Lecompton Constitution on the people of Kansas. The decision was to call a new election at which the people could vote freely and fairly on the constitution. 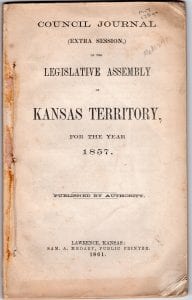 Extra Session of the Legislative Assembly in 1857. From the Lecompton Historical Society archives 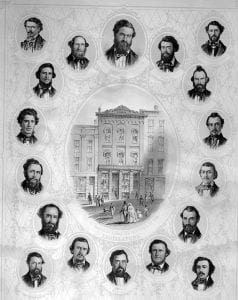 First Free-State Majority Legislative Council Senate members, 1857, who met in Lecompton, Kansas across the street from Constitution Hall in the Nace building. From the Kansas Historical Society. 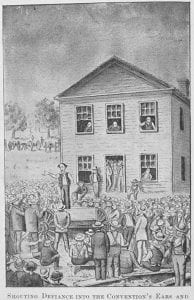 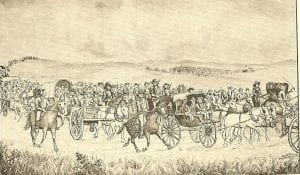 Members of the legislature, led by large, raucous crowds of Free State men heavily-armed and threatening violence against Lecompton, were escorted into town by James Lane’s militia. They paraded victoriously through town and stopped in front of Constitution Hall to listen to music and hear fiery anti-Lecompton oratory by Lane on the day the Free State extra session convened.

Where did they meet in Lecompton?

Built in 1856, the same year as Constitution Hall, the council building was once located on the east side of Elmore directly across the street from Constitution Hall. It was a smaller version of Constitution Hall and was constructed by William Nace, private secretary to Acting Governor Daniel Woodson. 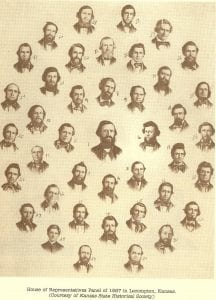 1857 House of Representatives who met in Constitution Hall. #15 is George W. Zinn from Lecompton. 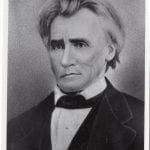 George Zinn. was a member of the House and an early resident of Lecompton. Photograph from the Territorial Capital Museum in Lecompton, Kansas. 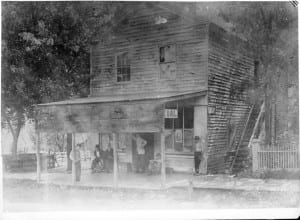 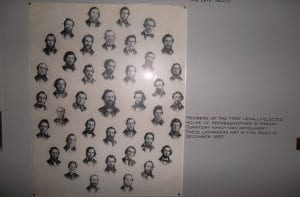 The Council Building became United States land office in 1860. Used later as a general store, drug store, and Lecompton city and council offices. It was destroyed by fire in 1932.

See these historic buildings, or where they once stood : Lecompton Walking Tour