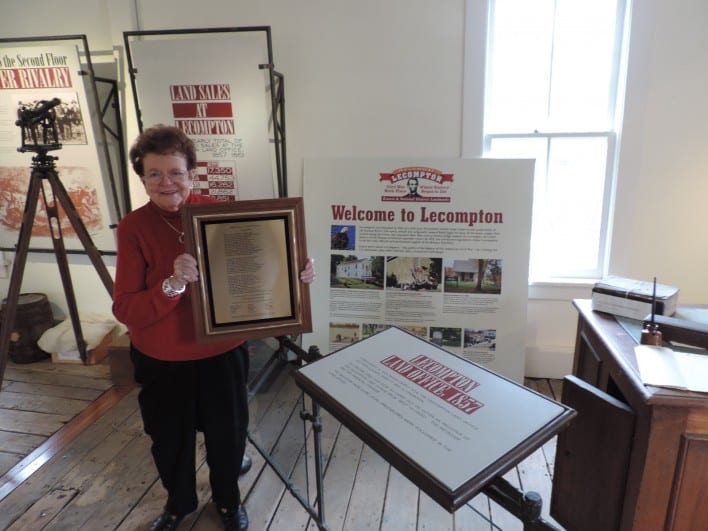 Opal Goodrick holds a plaque with the poem of Constitution Hall that she wrote thirty years ago to garner support for the building.

Happy 160th Anniversary to Lecompton’s Constitution Hall this year!  The poem below, written by Opal Goodrick, was read before the Senate Ways and Means Committee on March 3rd, 1986, and was instrumental in the Legislative decision to add Constitution Hall to the State Historic Properties list.  The poem was read by Nellie Glenn.  The building was purchased and donated to the State of Kansas by Senator Wint Winter, Senior, and Senator Frank Gaines.  Senator Wint Winter, Junior, was Lecompton’s State Senator at the time.  The Winter family has a long history of supporting historic projects in Lecompton.

History for All at Constitution Hall by Opal Goodrick

My story is short–though history tells much more,

Of when Abe Lincoln and Steve Douglas appeared on the floor

Of the United States Congress to argue the fate

Of territorial slavery–the point of debate.

The South favored slave, and the North favored free.

They put up a building to provide a nice hall

Where legislators could meet and decide on it all.

They wrote a Constitution, the best that they had,

To vote “with” or “without” slavery was what was so bad!

The voting was crooked; ballot boxes were stuffed,

The Governor left the Territory, the President huffed and puffed,

The election was repeated, and though it turned out right,

Among remnants left behind was the Constitution Hall;

A building, if it could talk, could surely tell it all,

It served many users, they came and they went,

Each occupant making a small payment of rent,

It was used as a Land Office, a Hotel, and for Schools,

The U.S. Court, an Apartment House, and a Hardware with tools,

The Telephone Office, the Masons, and the town Undertaker,

The Grand Army of the Republic even rented some space.

Then once again used it as the town’s voting place.

Meeting there winter, summer, spring, and the fall

It has survived many members, whose voices ring out

Through pages of the Minute Book, and stories told about.

But the time has arrived when help is a MUST.

To preserve this historic building, It’s a matter of trust.

It fulfulled its purpse, through Territorial strife.

Then 130 years of community life.

Restoration is progressing, and new generations will see.

The struggle of Kansas, and how it came to be.

We love this old building –you can tell by this rhyme,

CONSTITUTION HALL IS KANSAS HISTORY–and thanks for your time!